Candice Breitz's work was first seen in Australia when her video portraits of Annie Lennox and Whitney Houston were exhibited in 'Video Hits: Art & Music Video' at the Queensland Art Gallery in 2004. Following this, her work continued its anthropological study of popular culture, but turned its attention away from the image of the pop star and instead focused on the persona of the fan.

King (a portrait of Michael Jackson) 2005 is a multiple-screen video installation in which 16 of Jackson's most ardent fans each present their interpretation of his 1982 chart-topping album, Thriller.

Breitz recruited participants via advertisements in online Michael Jackson fan sites and in newspapers and magazines. After a rigorous process designed simply to find the most authentic and fanatical respondents (without any consideration given to their ability to sing or dance), 16 fans were given the opportunity to perform the entire Thriller album in a professional recording studio. In the resulting work, we are presented with an extraordinary a cappella version of the record presented by the 16 fans in unison.

Jackson himself is absent from the work — we neither see nor hear him — but he is represented through the collective performance of his fans. The highly constructed and unattainable figure of the pop world is reconfigured by Breitz through the accumulative interpretations of those who consume his music. While the 16 participants collectively constitute a portrait of Michael Jackson, the work also plays on the idiosyncrasies of each fan's performance and, in viewing the work, we become acutely aware of the unique identity that each fan presents self-consciously for the camera. Ultimately, we are presented with 16 separate portraits, each of which is mediated through the persona of Jackson. 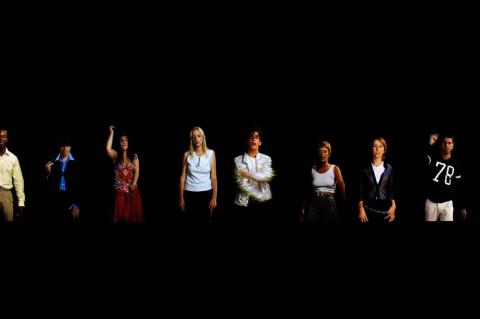 King (a portrait of Michael Jackson) 2005