Spencer Finch explores the peculiarities of human perception, bringing a combination of poetic sensibility and scientific rigour to a range of media, including painting, drawing, photography and installation. Light is the preeminent subject of his practice and he considers how our experience of it is inflected by a diverse set of subjective and objective factors such as geography, time, history and memory.

To create The Light at Lascaux (Cave Entrance), September 29, 2005, 5:27 PM 2005, Finch precisely recorded the quality of light at the transition point between the shadowy interior and entrance of Lascaux Cave, discovered in 1940 in south-west France and containing extraordinary examples of prehistoric art. In a gallery space, Finch recreates this light with a diagonal formation of fluorescent tubes and calibrated colour filters. The angle of the tubes mirrors the angle of a mountain as seen across the valley from the cave entrance, while the colours relate to pigments in the cave's prehistoric paintings, as well as tones from the landscape and sky outside. The illusion of depth and the effect of dappled light play against each other, while the combination of coloured lights heightens viewers' awareness of the glow as the carrier of an idea of a time and place. 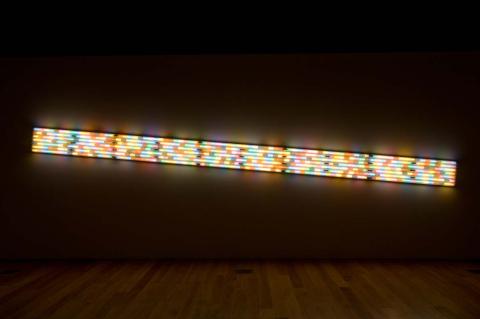