It has often been observed that Ai Weiwei's absurdist constructions reflect a Dadaist sensibility. Certainly a wry Duchampian wit pervades his practice but many of the materials employed are anything but the banal, everyday objects so often found in a Dada 'ready made'. Ai Weiwei is a discerning connoisseur and collector of Chinese antiquities. He takes objects that are hallmarks of Chinese cultural excellence - Buddhist sculpture, Ming and Qing furniture, Neolithic and Han dynasty ceramics - and employing strategies of destruction, reconstruction and preservation, playfully transforms the originals to create works that challenge the authority of cultural value, meaning and authenticity.

The work Feet is an example of Ai Weiwei's strategy of preservation in his transformation of found objects. In this case, the stone feet of looted Buddhist statuary dating from the Northern Wei (386 - 535 CE) and Northern Qi (550 - 577 CE) dynasties. China is littered with the wrecks of pillaged statuary, empty niches, headless torsos and, perhaps most spectral of all, pairs of bodiless hands and feet are found at sites of significance across the country. Much of the despoilment was committed during disruptive periods of dynastic change in China as new regimes attempted to remove all trace of the cultural and aesthetic achievements of former powers. The fragments that have been gathered by Ai Weiwei attest to the crudity of these efforts to obliterate the past.

Treading pedestals that once elevated, both literally and metaphorically, the dismembered feet exude a poetic and ghostly poignancy. Buddha, bodhisattvas and arhats are all prized for their elegant forms and graceful heads but Ai Weiwei's reappropriation of the overlooked and forgotten feet questions why these elegantly and carefully sculpted forms, apparently not even worthy of plunder or complete destruction, have been relegated the status of worthless debris. Rescued from the scrapheap of sculptural detritus, the fragments acquire a new relevance, dignity and significance in an act of determined and delicately nuanced preservation that explores the authenticity of the fragment and the transformation of its meaning from intact sacred object to sculptural shard, in a profound questioning of the cultural and aesthetic values to which they are attached. 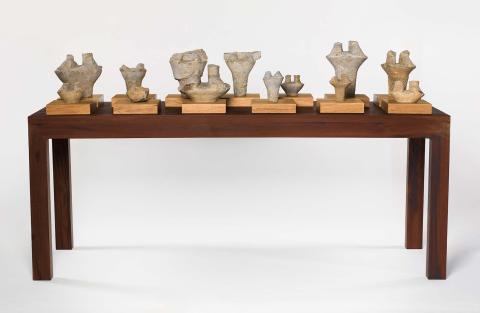