Yang Zhenzhong uses humour to reveal the contradictions within Chinese contemporary life. His video work 922 rice corns is a refined and ironic visual metaphor. Playfully invoking Cultural Revolution dogma of gender equality, industry, and extreme rationalisation, 922 rice corns sets a hen and a cockerel before the camera alongside a small pile of rice. How many grains of rice are there? And which fowl, male or female, will eat the most? The artist creates a satire on the control and surveillance of food consumption. The viewer must watch, transfixed, to find out which of the birds will win the contest for nourishment. Aided by two numerical counters at the bottom of the screen, a male commentator enumerates the cockerel's progress, and a female voiceover tallies the hen's progress, in this absurd dramatisation of counting and consumption. The parody is drawn out in the manner of a joke without a punch line and has a disarming effect upon the viewer, who must reassess the seriousness of their approach to the work, and laugh along with the avian abacus.

'I held a handful of rice in my palm. I wanted to know how many grains there were. If I counted them one by one, it would take too much time. So I put the rice on the ground and let two chickens help me count them. I thought this was a clever way to do it. But the chickens were not teachable. Sometimes they didn't finish the rice, sometimes they fought each other. I tried again and again to film them... In the end, I got the number: 922. Now I know I am foolish. Chickens never want to know how much they eat. This is a human problem. Humans are stupid.'(1)

Possessing a rare mastery of metaphor, much of Yang Zhenzhong's work has been created after a loosening of the constraints upon artistic expression in the 1990s. A number of other Chinese video and photography artists who also came to prominence during this period, such as Zhang Peili and Li Yongbin (video) and Song Dong (photography and video), produced video documentation of performances, often self-conscious interrogations of identity. 922 rice corns undermines a serious focus on the self in contemporary Chinese avant-garde practice. The work also problematises the broader Chinese social and political frameworks through which identity is imagined and constructed.

Yang Fudong, whose work is also represented in the Queensland Art Gallery's Collection (Acc. no. 2003.083), provided the male voiceover for this work. 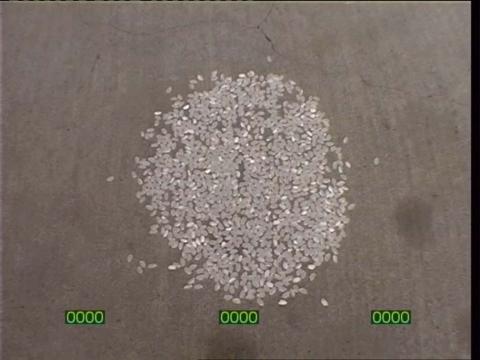