Khadim Ali is an ethnic Hazara (a Persian-speaking ethnic minority in Northern Afghanistan) whose familial connections are to the Afghan city of Bamiyan. Since the mid 1990s, the Bamiyan region has been occupied by the Taliban, resulting in the massacre of many Hazara people and the destruction of sacred sites, such as the ancient Buddhas of Bamiyan.

Ali's series 'Jushn-e-gulle surkh (Celebration of red tulips)' was created in response to the 1998 massacre of Hazara people in Mazar-e-Sharif during the ancient celebrations of Norooz (Persian New Year); a ritual condemned as anti-Islamic by the Taliban. Tulips have great historical significance in Persian culture and here represent the fields of flowers that bloom during Norooz, as well as the blood of the massacre. The Arabic calligraphy inscribed on floating grenades refers to the triumphant slogans used during the Taliban's siege. 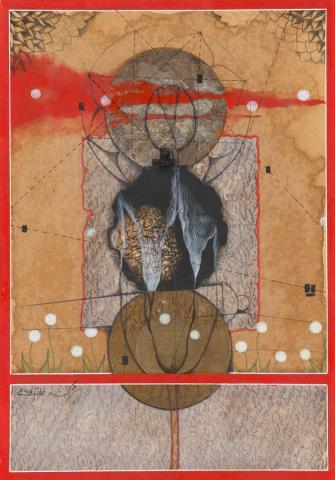