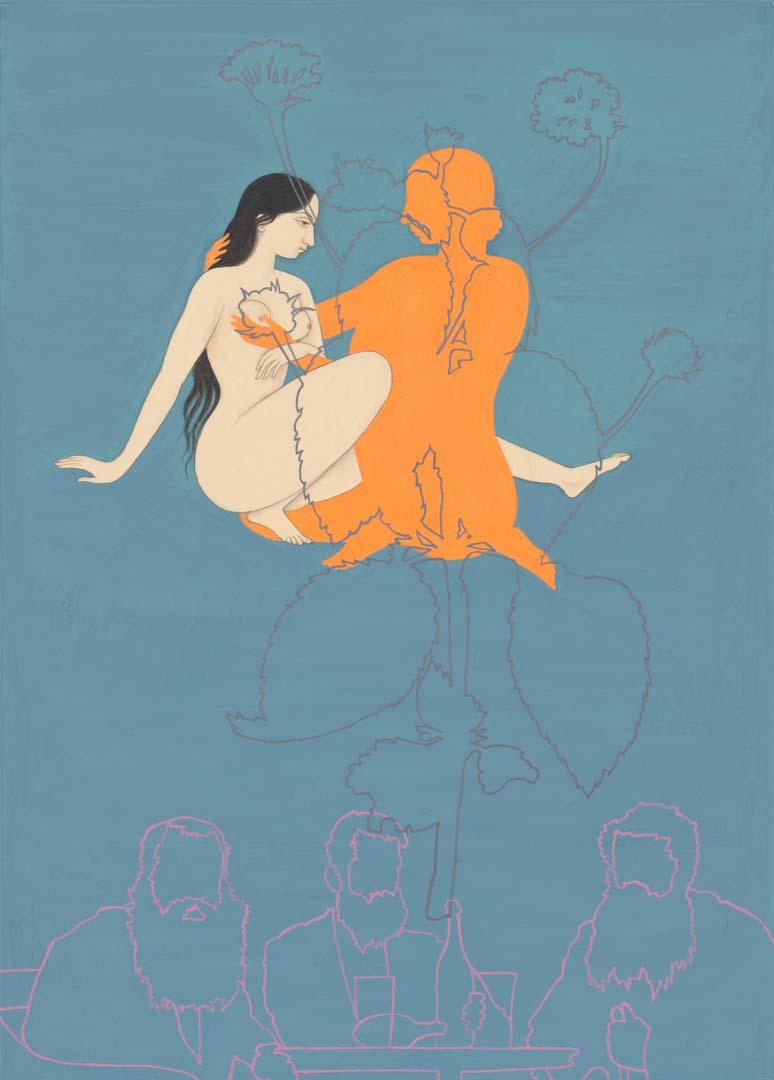 The art of the Mughal miniature is a prominent source of inspiration for Nusra Latif Qureshi. Born in 1973 in Lahore, Pakistan, Qureshi trained in the theory and practice of the miniature at the National College of Art (NCA) in Lahore, Pakistan, and graduated in 1995. She became a teaching assistant and visiting lecturer in miniature painting at the department of Fine Arts, NCA, from 1995 to 1999, and relocated to Australia in 2001, for study. Qureshi has since completed a Master of Fine Art at the Victorian College of the Arts (VCA), University of Melbourne.

In Gardens of desire II 2002, Qureshi refers to a south Asian, eighteenth-century Hindu Pahari painting of Radha and her lover, god Krishna - the most popular of the Hindu divinities, often celebrated for his charm and love of dance. The viewer's eye is drawn to the naked figure of Radha, who is held by Krishna. Krishna is rendered flat and without detail. Overlaying the lovers is an outline of a flower and in the lower section of the composition there are three seated men with beards, a typical scene to be found in the tea houses of pre-independence India.

Similarly, in Backdrops II (Acc. no. 2003.080), a woman in her boudoir sits among pillows and cushions, gazing absently away from the viewer, with the overlay of a bird feeding on a flower. Qureshi's investigation into notions of 'other' within postcolonial society is a subject she believes can be effectively manipulated within traditional mediums, such as the Mughal miniature. Qureshi views the reception of much contemporary work as understood through the traditional context of what is accessible, and the miniature is a familiar format.

The works Conversations II and Afterthoughts (Acc. no. 2003.081-082) are quiet, contemplative self-portraits in which Qureshi is depicted seated in the intimate surrounds of a bedroom. The lack of perspectival depth in the composition and the absence of symbolic overlay suggest the primary subject should be viewed as liberated from the confines of traditional narrative, where men are primary subjects within the scenario of historical events. By subverting and experimenting at the formal and conceptual levels, Qureshi offers an abstracted contemporary chronicle.