Freefall (from 'Forced into images' portfolio) 2001 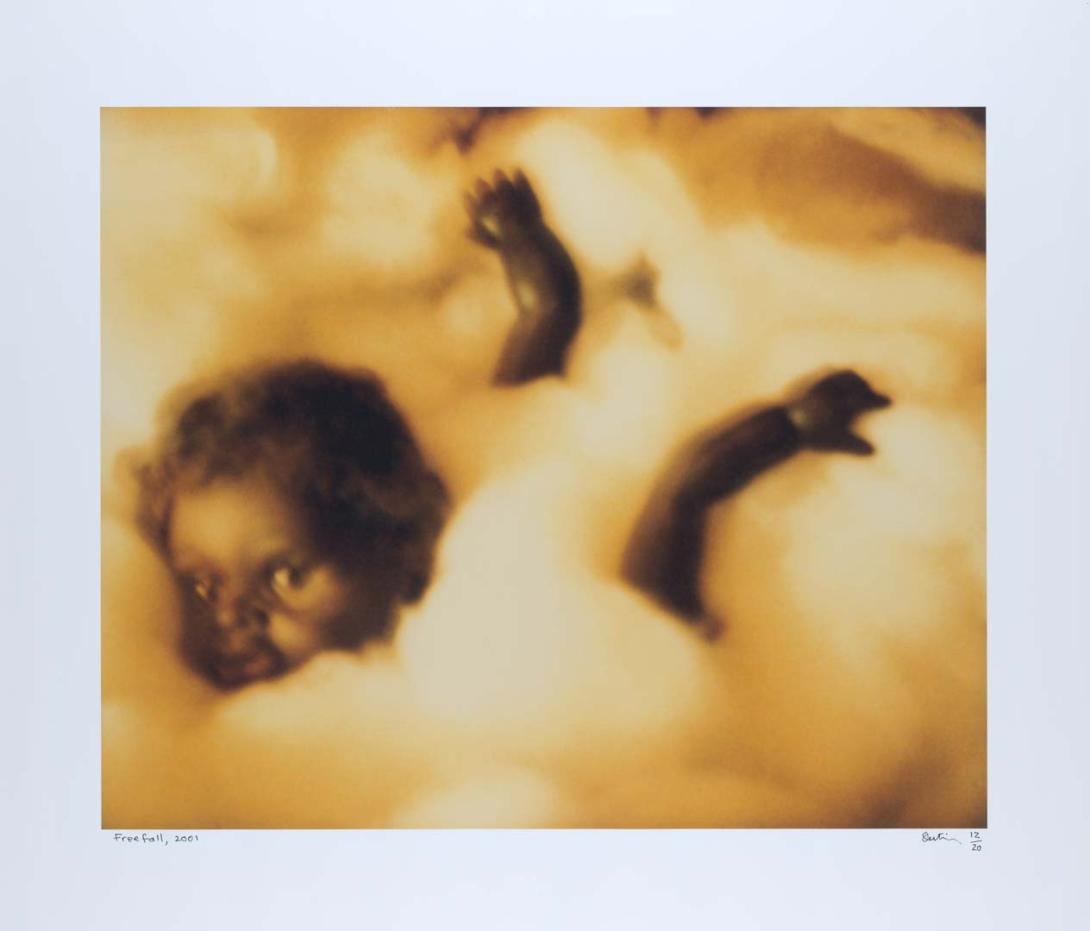 For biographical information see Acc.1995.195 'Essay'. Destiny Deacon is one of Australia's most significant Indigenous artists and was one of two Australian artists invited to the 2001 Yokohama Triennale - the major Japanese international art exhibition in which she showed this work. 'Forced into images' is made up of two parts: a portfolio of ten printed polaroid photographs (QAG Acc. nos 2004.172a-j) and a video (Acc. no. 2004.173). Deacon's staged photographs are ambiguous, acerbic, ironic, naughty, touching and painterly. They use friends and family, dolls and other toys and objects found around her house to confront and up-end stereotypes, and to comment, sometimes savagely, on contemporary Australian life. Her images are focused on the house, the home, and family relatives and close friends. The photographs in this portfolio form a narrative about the life of an Indigenous girl from birth to adulthood. It was partly inspired by news reports in early 2001 about violence against Indigenous women in Australia. The title of this portfolio quotes from a letter by the African-American poet Alice Walker: 'I see our brothers and sisters, mothers and fathers, captured and forced into images, doing hard time for all of us'. It was printed in the catalogue of the exhibition of Jane Faulkner's collection of racist artefacts stereotyping African-Americans, held at Berkeley Art Center in 2000, entitled 'Ethnic notions: Black images in the White mind'.(1) Destiny Deacon herself, of course, constructs most of her tableau images from such black dolls and other forms of not-so-innocent kitsch. It's her precise intelligent re-contextualising and re-reading of these objects that is the strength of her work. The humour, wit and clowning, shown both in her persona and in her art, mask serious personal and historical traumas that are experienced universally. The images in the series 'Forced into images' are chapters in the girl's life: 'Freefall', where a beautiful baby is born and then is nursed by her mother, and a young child in a peaceful domestic home in 'Baby love'. The parents separate in 'Where's mummy?', and the child is institutionalised in 'Girl alone'. Although happy in some ways in 'Happy happy institution', she suffers at the hands of the staff, and is also deprived of her family life in 'Trustee'. The artist states that 'Protecting paradise' relates to the protection of cultural identity despite being forced to undertake demeaning occupations.(2) The ominous spider in 'Home truths' is a reference to child abuse and domestic violence, issues which are most often 'kept in the family' and that nobody talks about.(3) 'Looking for work' depicts the young woman forced to spend large amounts of time housebound through poverty from being unemployed. In the last image, 'Escape', the girl leaves the house metaphorically or physically, either through a change of life or through death. This rather grim reading of the photographic portfolio contrasts with the innocence and virtue of the children found in the video of the same title. The two young Indigenous children, who are relatives, capture innocent role-playing and experimentation with masks. Essay by Djon Mundine, Senior Consultant Curator, Indigenous Australian Art, Oct, 2004. 1. Walker, Alice. 'Ethnic notions: Black images in the White mind'. Berkeley Art Center, Berkeley, United States, 1982, reprinted 2000, pp.11-12. 2. Deacon, Destiny. Panel discussion 'Contemporary debates about Indigenous Australian identity', (held on 3 July 2004, DVD (no. 5)), part of 'Blak insights: Indigenous voices, new directions conference', QAG, Brisbane, 3-4 July, 2004 (DVD nos 1-12). 3. A convicted pedophile in prison is called a 'rock spider' by other prisoners.

Destiny Deacon's art revolves around her house, its everyday objects and a common shared domestic life. Made in the confines of her studio home, Deacon's photographs record a form of grim, but witty Indigenous soap opera.

This seemingly exotic work is rooted in the racial politics of a postcolonial society. Commonly touched, hugged, handled and used objects represent concepts and more than just simple emotional tools.

The Forced into images 2001 portfolio borrows its title from the words of African-American poet Alice Walker, 'I see our brothers and sisters, mothers and fathers, captured and forced into images, doing hard time for all of us.'

The photographs map out the semi-autobiographical story of the life of a young Indigenous girl from birth to adulthood and independence, set against a dark background of domestic violence against women. 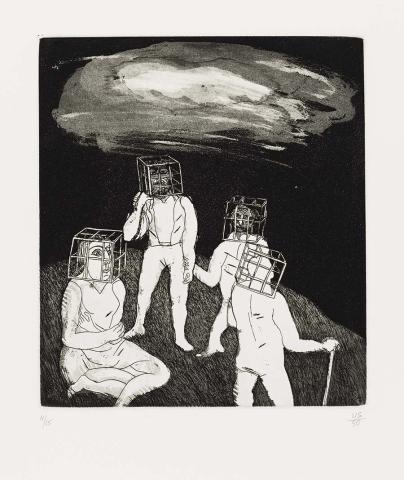 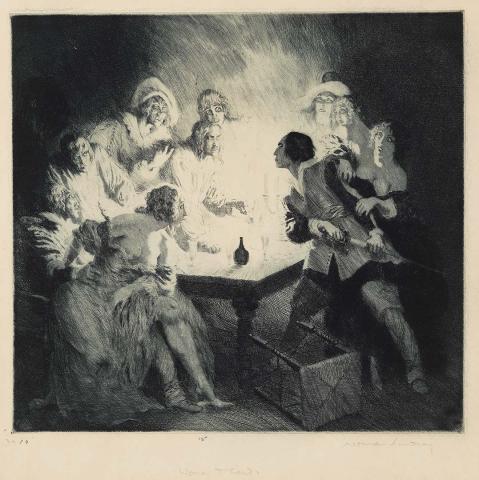 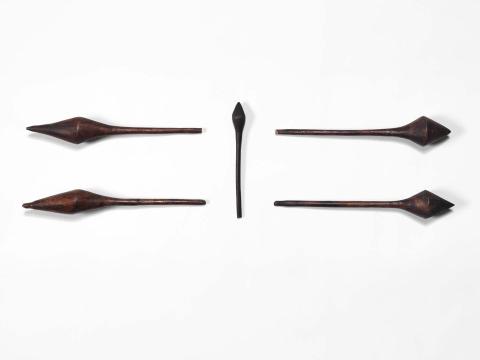 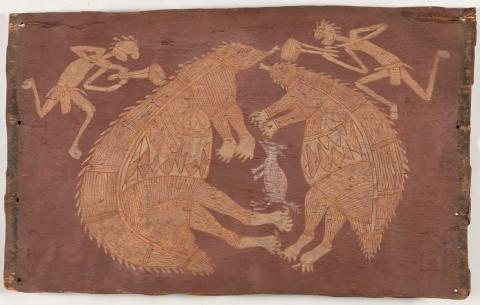 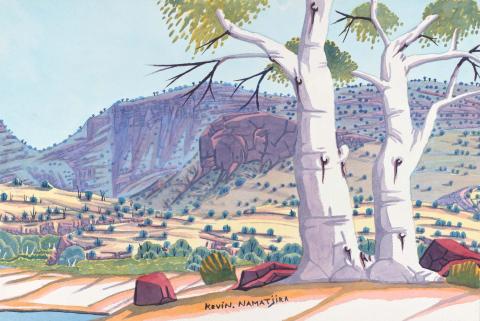