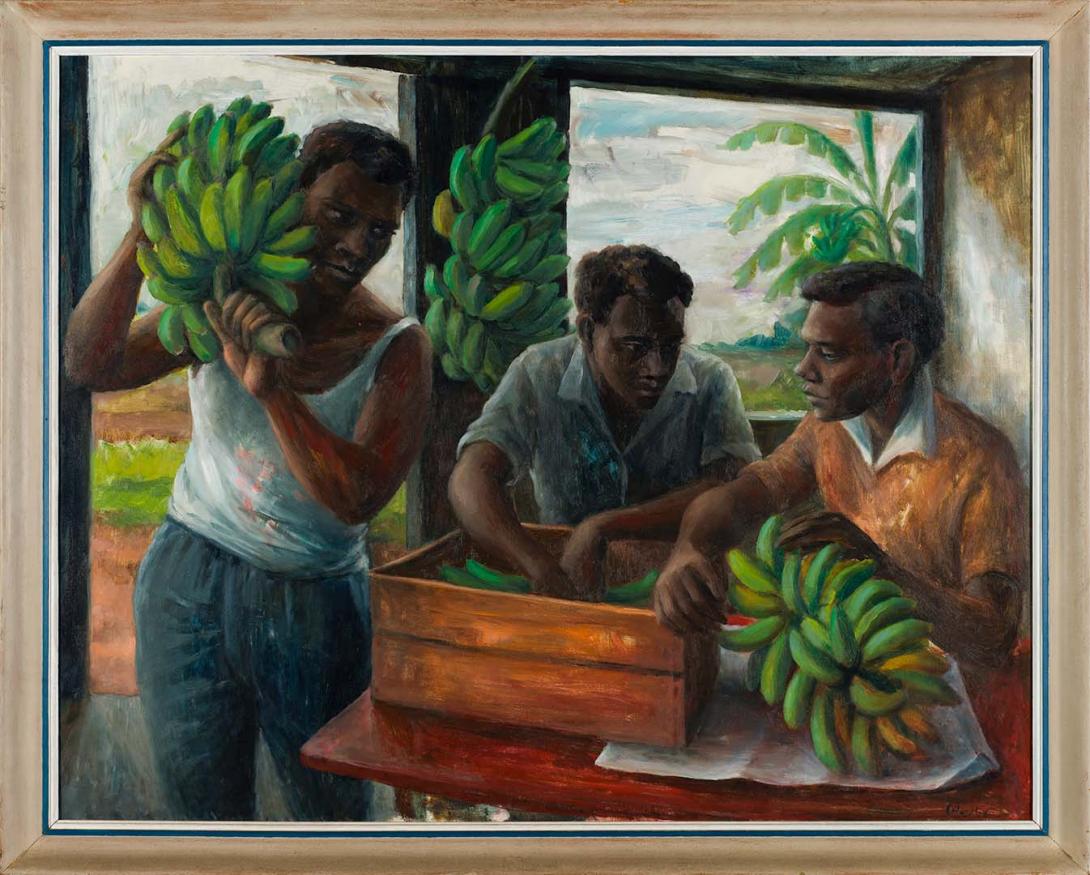 Working in the second half of the twentieth century, Margaret Olley made traditional still life and interior subjects uniquely her own. It was in Brisbane in the 1960s that she first established what would become a national reputation. Arguably one of her most productive and creative periods, a number of works from the Brisbane period drew their inspiration from the human figure. However, as curator Barry Pearce has noted, Olley’s interest in the figure did not last:

'. . . over time, figure painting began to recede from her repertoire, with the exception of her own image, a detached observer occasionally seen reflected from a mirror, or amongst objects of her domestic surroundings'.(1)

Between 1960 and 1963, Olley painted several figurative works, including some that feature Aboriginal girls as subjects, several of which were awarded prizes and garnered her further critical acclaim. Olley’s 1962 exhibition at the Johnstone Gallery in Brisbane created nationwide publicity with the information that paintings to the value of £3000 were sold, doubling the previous record for a woman artist. Reviewing the 1962 exhibition for the Bulletin, Dr JV Duhig remarked ‘Margaret Olley has reached the flood tide of her art and has stepped up to the top ranks of our artists’.(2)

Painted in 1963, The banana cutters is historically significant because of its combination of uniquely Queensland subject matter and exemplary figure painting. Pearce notes that ‘1959 marked a crucial turning point in her career when she gave up drinking and set herself towards becoming a better artist’.(3) The early 1960s were tremendously successful for Olley: with a new found enthusiasm and energy she became more confident in her compositional design and use of colour. The banana cutters embodies these qualities, and was awarded first prize at Brisbane’s 1963 Royal National and Agricultural and Industrial Association of Queensland Exhibition of Art.

Three male workers appear on a banana plantation. The figures interact with each other through the labour at hand, one hoisting the bright green banana stem on his shoulder while the others cut and sort bananas into a box. The viewer’s eye is drawn from the shadowed interior of the shed to the bright light and vegetation outside, framed by the window and doorway. At the time of painting, three of Olley’s major prizes were for flower and figure studies. They included the 1963 Bendigo Prize for Girl with daturas, the 1963 Finney’s Centenary Art Prize for Susan with flowers, and the 1965 Redcliffe Art Contest for Patricia with fruit and flowers. The banana cutters follows this figure-and-still-life format but with a uniquely masculine working subject. The male figures, like the Indigenous subject of Susan with flowers, are depicted with an innate, quiet dignity that is enhanced by Olley’s choice of harmonious colour relationships.

The workers may be of South Sea Islander descent, pointing to the history the South Sea Islanders recruited - or abducted - from across Melanesia between 1863 and 1904, and brought to work across Queensland and northern New South Wales. It is interesting to compare their depiction here with that of artist Donald Friend, who previously travelled with Olley to north Queensland to paint and who presented his Islander subjects in a more romanticised, idyllic style. Olley’s figures are represented by a straightforward realism, in the performance of their labour.

From a period in Margaret Olley’s career marked for its vitality and creative freedom, The banana cutters adds great depth to the Gallery’s holdings. Through its intriguing subject matter and masterly rendering of colour and light, the painting is an invaluable addition to the Collection by this much-loved Australian artist.