Lindsay Roughsey was born on Mornington Island (Gununa) in c.1913, to Lardil parents Kiwalpija and Gathagin (alias Gilgil) or Minnie. He was of the puralangi class or 'skin' and was named Burrud (meaning seaweed). (Like many Australian Aboriginal groups, the Lardil were divided into eight social classes, or 'skins' as they are known in Aboriginal English. This social system provided preferred rules of behaviour between the members of each class and also prescribed the group from which one obtained a spouse.) When Roughsey was one year old, a Presbyterian missionary established himself on Mornington Island and founded a mission which continued for about 60 years. It was one of the missionaries who gave to Kiwalpija the name Roughsey derived from 'Rough sea', alluding to the choppier type of sea resulting from prevailing winter winds on the south-east side of the island where Kiwalpija's country was located. Kiwalpija's sons were also given their English names when they were placed by the missionaries in their dormitories. Roughsey is more famous amongst his own people on Mornington Island as a song-man, rather than a painter. He was a song-man of the Larumbanda (windward) or south-east division of the Lardil, performing all of their songs at public corroborees for over 50 years. During most of the 1970s and 80s, he was the lead song-man for the Lardil at public dances and dance festivals (involving ten or more tribal groups from around the Gulf). As lead song-man Roughsey sang songs (burdal) from all of the Lardil divisions. In the late 1970s, after the missionaries had left, Roughsey was a founding member of the Aboriginal Corporation of the Wellesley Island Moyenda, a traditional elders' group established to reintroduce the Aboriginal 'law'. At the same time, Roughsey and other elders instigated a revitalization of male initiation ceremonies. This painting depicts events associated with the coming of the first Lardil people. It tells the story of three of the first humans to arrive at the island, Mahpil, who led the people there, his wife Tjin tjin, and her uncle Tuiwal tuiwal. At the time people were immortal. This trio created the social laws and structures of the Lardil. They are also said to have tested all the land and sea foods so that they could instruct those who followed how to cook and eat them. The two men created places and ceremonies, and gave totemic names to the plants and animals by which the moiety system (the rules governing appropriate partners for marriage) is classified. The lower two-thirds of the painting shows these three figures and some of the species they encountered and named on Mornington Island. The upper third depicts a specific incident relating to incest and adultery, and the punishment of these offences. Tuiwal tuiwal seduced his niece, not realising that they had been observed by her husand Mahpil. Mahpil asked the other man to dig a well, and speared him in the anus when he was reaching down to the water. Mahpil and Tjin tjin fled, and Tuiwal tuiwal placed the curse of death on them. From then on the Lardil people were mortal. When Mahpil and his wife and their daugher died they became the three pillars of stone at a place called Ngawalan on Mornington Island. These rock pillars are depicted upper right in this painting. Body-painting and decorated artefacts are traditional on Mornington Island, but painting on bark was not done before European contact. The style of this painting shows a mixture of Arnhem Land, Tiwi and figurative European influences; this composite style was invented by Lindsay Roughsey and his younger brother, Dick, in the early 1960s. They established Lardil bark painting, which continues today. For information on Mornington Island see Acc. no. 2005.150 'Additional information'. 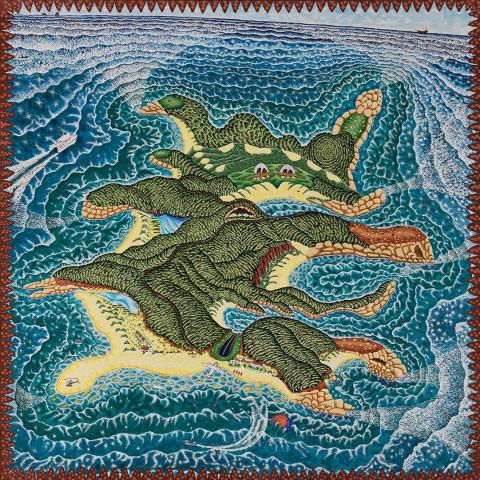 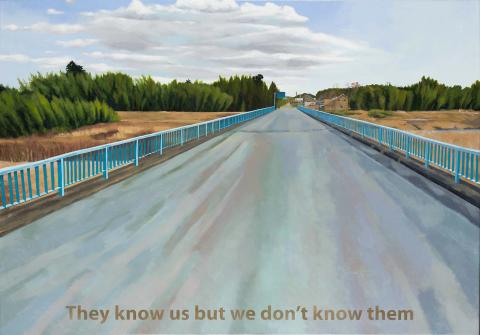 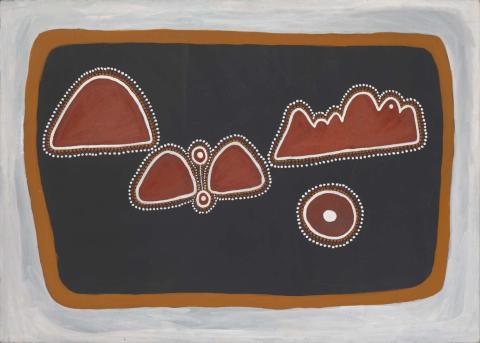 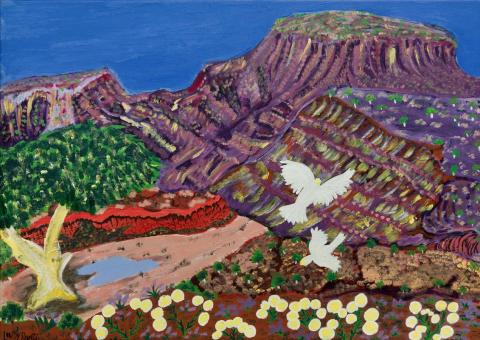