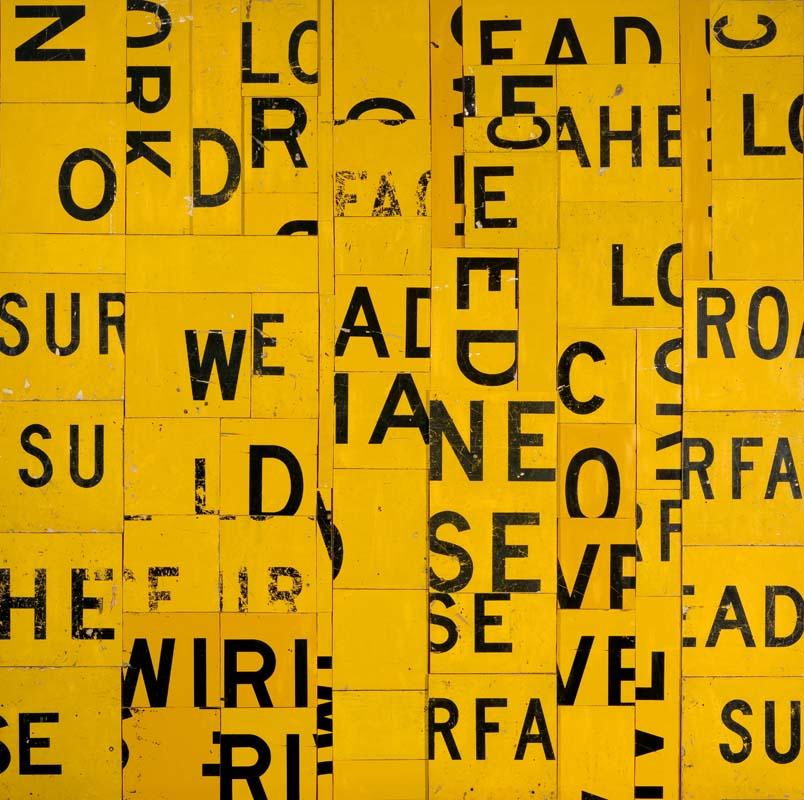 Rosalie Gascoigne first came to public attention in the mid 1970s through her installations and boxes of found objects. She is best known, however, for her wall-based assemblages, which brought diverse materials from everyday life into new frames of reference. Gascoigne worked with items that had been discarded and left to weather, finding beauty in them that would normally be overlooked. By the mid 1980s, she had become more formal in her outlook, often using grid patterns in her compositions, as in this work.

The title Lamp lit might suggest car headlights catching the road signs from which the work is made, but it also refers to the artist's emotional response to a mass of brilliant yellow lantern-shaped flowers she encountered on the road to Bungendore in New South Wales, which inspired the work.

Gascoigne wrote in 1987 about her search for materials:

'On the way back to Canberra I came upon a road gang sitting among the winter tussocks having a smoko. I pulled up. Heads turned. Six men, one stare, closed ranks... "I want, I NEED some broken retro-reflective road signs. I am a sculptor." They looked concertedly amused and sceptical ... The foreman detached himself, sorted through his signs, and offered me one I didn't want. I accepted gratefully. "Maybe", I suggested, "I could have that lovely yellow one? It does, after all, have a hole in it." He stretched a point and let me have it. He carried it to my car. I was touched. In the scavenging business one usually lugs one's own.'