Long Tom Tjapanangka, a Pintupi senior, was born c.1929 at Lupul in the Frederick Range in the Northern Territory. He worked in the Papunya region as a stockman and a police tracker for many years. His two wives, Marlee Napurrula and Mitjili Napurrula, also known artists of some significance, settled with him in Haasts Bluff (215 klms from Alice Springs) towards the end of 1993. It was from here that he started to paint full-time. His subjects are trees, rocks, papa (dog), termite mound, two emus and his country. He is renowned for his acute observation, clarity of vision and for developing a distinctive personal style. Long Tom's sophisticated and minimal approach is a departure from the classical desert style of his peers. His ability to handle space and scale has enabled him to produce a body of work from small works on paper to large-scale works on canvas such as 'Ayers Rock, Limestone Bore, Mt Leibig and Irantji'. Exhibiting since 1994, his works are now in the collections of the Art Gallery of New South Wales, Flinders University Art Museum, South Australia, the National Gallery of Australia, the National Gallery of Victoria, Museums and Art Galleries of the Northern Territory and various private collections. This work is one of only four large-scale works produced by the artist, additional to a small number of commissions. One was purchased by the National Gallery of Australia in 1994 and the remaining three entered corporate collections. Early in 1995 Long Tom was commissioned to complete two horizontal works for the Beeton Corporation. This inspired the artist to produce more major works and he was particularly interested in doing a vertical one for the commission, but was prevented from doing so by the specifications of the commission. This work is the result of his determination to do a vertical work of his own volition. He said at the time that he "wanted to do what was really in my head" (conversation with William Nuttal, Director, Niagara Galleries, Sept. 1998). Prepared from: National Aboriginal and Torres Strait Islander Vision Artists Database. Strocchi, M. (ed.). 'Ikuntji: Paintings from Haasts Bluff 1992-1994'. IAD Press, Alice Springs, 1995, p.14. Margo Neale, Curator, Indigenous Australian Art, Jan. 1999. 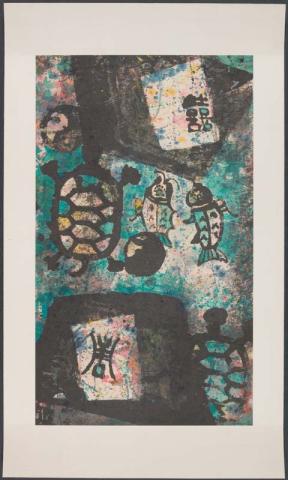 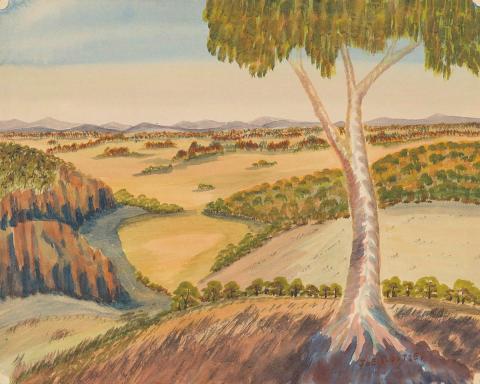 (Road from Laura towards Lakeland) 1959 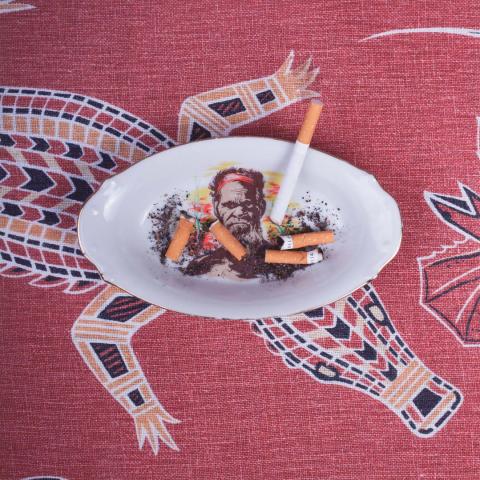 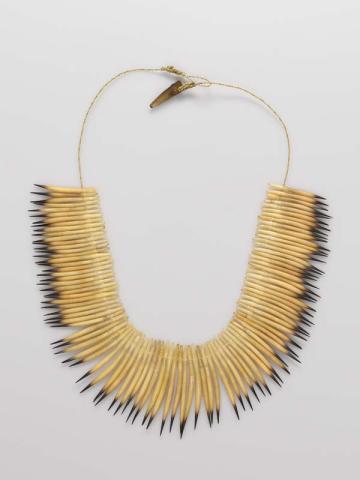 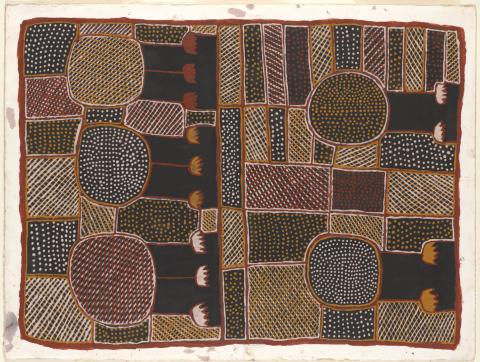