The Western Arnhem Land region is dominated by the Arnhem Plateau, a vast sandstone escarpment encompassing an inestimable number of rock art galleries dating back more than 30 000 years. The knowledge of multiple generations embodied in the elaborate figures painted onto the rock surfaces — articulating spiritual and cultural links between ancestral beings, people, animals and country — remain still as a fragile record of times of great change in climate, landscape and society. Artists living here are of the Kunwinjku language group.

The transition from rock art to painting on bark was first seen in the early twentieth century in works by Kunwinjku artists responding to visitors’ wish to possess a portable work of art. A key element linked to the local rock art was the familiar ‘X-ray’ style (where the complex internal details of its subjects and the human skeletal system are shown), a technique widely regarded in the 1960s as the standard for ‘authentic’ Aboriginal art.

Yirrwala was one of the most influential artists from Western Arnhem Land. A leader, law man and clever man within his community, his dedication to educating the broader public about Kunwinjku culture earned him an MBE (Member of the Order of the British Empire) in 1971. In Lumaluma c.1970, Yirrwala depicts the creator of the Mardayin ceremony, combining the X-ray technique used for the spirit’s sacred bones and lines of rarrk patterning representing Mardayin designs. 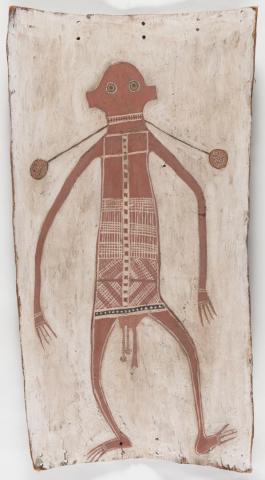 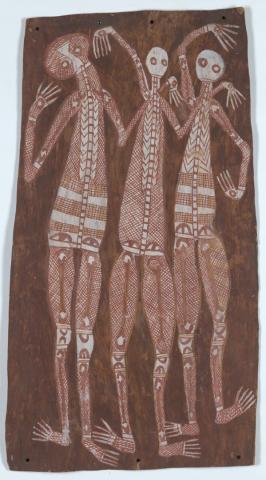 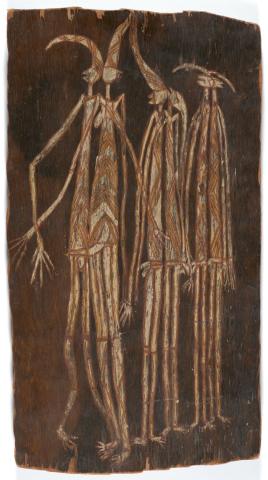