The Gallery was honoured with a gift from the estate Margaret Olley, AM, in 2012 - a superb sculpture by Edgar Degas titled Danseuse regardant la plante de son pied droit (Dancer looking at the sole of her right foot). The work captures a typically candid and private moment in the life of a dancer - a subject that Degas explored exhaustively through paintings, drawings and prints. The gift was made with the assistance of Philip Bacon, AM, Margaret’s long-term friend and an executor of her estate. Philip was also instrumental in securing the sculpture for Margaret Olley in 2008, when it was sold by a private collector in the United States.

During his lifetime, Degas was primarily known as a painter and draughtsman, and his images of ballerinas, dancehall habitués, racehorses and prostitutes continue to capture the public imagination as evocative depictions of life in fin-de-siècle Paris. His sculptures were virtually unknown to the public, although his contemporaries were aware of his work in the medium - Renoir even proclaimed him ‘the greatest living sculptor’. However, Degas publicly exhibited only one bronze - Little Dancer, Aged Fourteen 1881 - and its negative critical reception was perhaps responsible for the fact that sculpture remained, for the rest of his life, a largely ‘private pursuit’.(1) For Degas, sculpting was more akin to sketching and drawing than it was an end in itself - a means to explore particular poses, masses, forms and volumes.

Danseuse regardant la plante de son pied droit is based on one of the wax statuettes found in Degas’s studio on his death in 1917. The posthumous production of the bronze sculptures is a fascinating, complex and, in many ways, incomplete story. In 1919, Degas’s heirs granted the rights to cast in bronze a limited edition of 74 wax sculptures to Adrien A Hébrard, the proprietor of a respected Paris foundry. Work on casting the sculptures began in 1919 and continued until 1936, just before the Hébrard Foundry ceased operations in 1937.

The sculpture bears the foundry stamp ‘CIRE / PERDUE / À A HEBRARD’ (‘Lost wax / At A Hébrard), with the assignation ‘40/T’. Each of the sculptures was assigned a number denoting the sculpture’s subject and a letter referencing the number of the cast. Each series was originally intended to be cast in an edition of 22, of which the first 20 were for sale, numbered A to T. The remaining two of each set were reserved for the foundry and for the artist’s heirs.(2) The stamp suggests, therefore, that this particular cast is one of the original from the Hébrard foundry (several copies produced after 1936 have less direct connections to the original wax sculptures, so the Hébrard stamp is highly significant). Danseuse regardant la plante de son pied droit is further distinguished by the fact that it is one of only three wax sculptures that Degas himself chose to cast in plaster, sometime between 1900 and 1903 (the plaster cast remains in a private collection). The original dark green wax and cork model, recovered from the basement of the Hébrard Foundry in the 1950s, is now in the National Gallery of Art, Washington DC, donated by the noted philanthropist Paul Mellon.

Interestingly, Edgar Degas was also a collector of drawings and paintings and hoped to be a generous philanthropist himself. Unfortunately, confusion over his Will led to acrimony among his potential heirs, and his collection was auctioned off rather than forming the basis of a ‘Degas museum’, as he had hoped. Unlike Moreau, Renoir, Rodin and Matisse, Degas remains one of the few major nineteenth-century French artists without an eponymous museum in France. 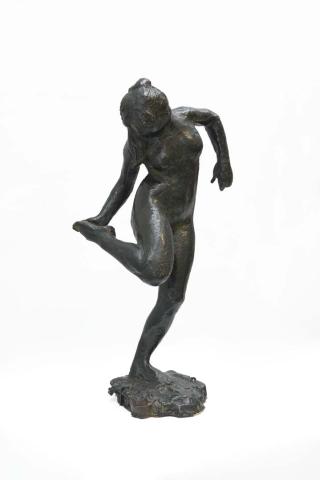