Public art has the power to change the cultural landscape in which it stands. Recently, Judy Watson’s impressive cast bronze sculpture, tow row, was installed in the forecourt of GOMA. Watson’s work was the recipient of the Queensland Indigenous Artist Public Art Commission (QIAPAC), a competitive process that would ultimately see a major work by an established Queensland contemporary artist of Aboriginal or Torres Strait Islander heritage take pride of place at the entrance to GOMA. The commission is part of a broader project in which the Gallery engages with Indigenous art, culture and community, as highlighted by the recent adoption of its Aboriginal and Torres Strait Islander Engagement Strategy.

Watson’s sculpture is a reimagination of a traditional fishing net used by Aboriginal people, including on the Brisbane River, barely 100 metres away. The nets, locally known as ‘tow row’, were used to scoop up fish near the banks of the river, or to catch entire schools of fish in smaller creeks, where fishermen would stand midstream during the dropping tide, trapping the fish. Traditionally, this type of fishing was the work of men, and senior fishermen took pride in large bone callouses developed by binding the wooden armature of the nets to their wrists and forearms.(1)

The importance of the correlation between past, present and future is acknowledged by Watson who, in her initial proposal, noted that:

[The] use of fibre and water as the conduit for catching fish evokes ideas of sustenance, family, culture, survival. The fragility of the object cloaks its hidden strength, a metaphor for the resilience of Aboriginal people who have held onto the importance of land, culture and family through adversity and deprivation. It will be a lasting memory of the indelible Aboriginal presence that is a part of this shared space.

tow row, like so many of Watson’s public works, was the product of a robust, collaborative exchange. No tow row is known to have been made in the last half century, so Watson engaged local Quandamooka weaver Leecee Carmichael and together they examined the weaving techniques of local nets in the Queensland Museum. Carmichael recreated the knotting techniques to make an enormous net with the help of numerous members of local Indigenous and non-Indigenous communities, which was then cast in bronze by UAP (Urban Art Projects), an internationally recognised local foundry with whom Watson has worked for over 20 years.

Mogwaidja is the local language term for the story/place of the spirits of ancestors, equivalent to the dreaming. It explains that the Mogwai (ancestor) whose spirit imbues this area is Kuril, a young female weaver. And so this sculpture of a woven object, and its permanent home at the entrance of one of Kurilpa’s most significant institutions, seems a fitting acknowledgment to the story of this place.

The story of Watson’s work is one that transcends its physical form and speaks of cultural retrieval and community activation. By creating this contemporary public sculpture, Watson enables us to glance at the history of the site. She has also encouraged the renewal of a weaving and netting tradition dormant for decades, and allows us to see a present where local Indigenous art, culture and traditions can stand strong and proud alongside — and in front of — some of the world’s greatest contemporary art at GOMA. 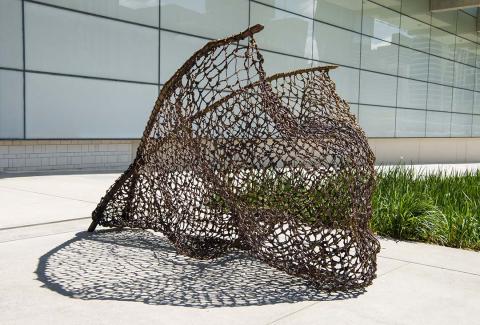