The fascinating and compelling narrative and the Queensland settings of Sidney Nolan’s paintings about Eliza Fraser have wide appeal and hold a particular interest for local audiences. The recent purchase by the Gallery of Platypus Bay, Fraser Island 1947 adds an additional important work from this series from Nolan’s original Moreton Galleries exhibition in Brisbane in 1948. This acquisition allows the Gallery to tell in greater depth the significant part this story had in Nolan’s artistic development.

In July 1947, Sidney Nolan travelled to Brisbane, eager to escape his increasingly uncomfortable and tense relationship with John and Sunday Reed at Heide. His affair with Sunday Reed had soured, the bonds between them being completely severed when he married John Reed’s sister, Cynthia, in Sydney the following year. Interestingly, Nolan’s marriage certificate records Fraser Island as his place of residence, suggesting the island had worked its magic on his psyche. For Nolan, his time in Queensland was an opportunity to be energised by fresh, fertile landscapes, both physical and cultural.

The fascinating and compelling narrative and the Queensland settings of Nolan’s Eliza Fraser paintings have wide appeal and hold a particular interest for local audiences. Nolan’s own interest was originally sparked by two visitors to Heide: Tom Harrison, who had trained commandos there during World War Two, and Barrett Reid, a Brisbane poet. Between 1947 and 1948, Nolan stayed in Brisbane with Reid and visited the rainforests, swamps, and lagoons of Fraser Island. He was introduced to the historical figure of Eliza Fraser, a Scottish woman who was shipwrecked near the island in 1836, and after whom it was subsequently renamed. Nolan read an account of the incident in Robert Gibbings’s 1937 book John Graham, Convict, 1824: An Historical Narrative Written and Illustrated by Robert Gibbings at the John Oxley Library in Brisbane. He was fascinated by the story of her survival, her time spent with the island’s Indigenous people (variously described as captivity or salvation) and her rescue by escaped convict John Graham. Nolan detailed the Fraser Island landscape — and Eliza Fraser and John Graham’s engagement with it — in obsessive detail. He captured various island scenes, of Platypus Bay, Lake Wabby and Indian Head, while other works incorporated a lone female or male figure in the landscape, as in the Gallery’s Mrs Fraser 1947, and these were displayed in his 1948 exhibition at Moreton Galleries, Brisbane.

Platypus Bay, Fraser Island presents a dreamlike landscape of lustrous blues and greens. Its subtle beauty, rendered mysterious and otherworldly with a foggy dissipated central band (possibly morning mist, or cloud), disrupts the visual progression between land, bay and sky, partially obscuring what appear to be trees. Perhaps this ‘impediment’ finds its best explanation in an address that artist Judith Wright gave to the 1975 Fraser Island Environmental Inquiry, during which she stated:

'So many of us have as it were an inward expectation of a European landscape and therefore I think, it has been difficult for us to appreciate the subtle beauty of Australia … Painters have trained our eye much more to appreciate this beauty.'(1)

Between 1947 and 1948, Sidney Nolan painted at least 15 images of Fraser Island and Eliza Fraser. He then returned to the same theme briefly in 1952, and again during the late 1950s and early 1960s, when he produced numerous works referring, either obliquely or directly, to the Eliza Fraser story and the landscapes he had encountered on the island. Their continuing presence in his paintings, almost 20 years after his initial curiosity, suggests that the episode affected his work greatly, making Queensland instrumental in his development as an artist. 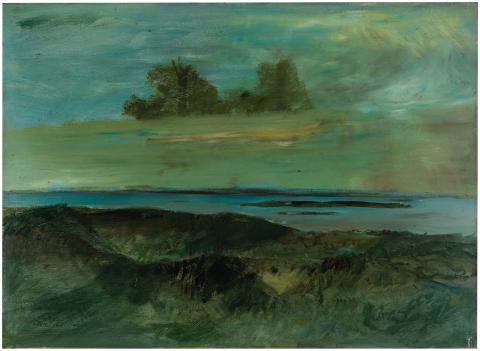