Born in Morocco and raised and educated in France, Latifa Echakhch draws on objects and motifs relating to her Moroccan heritage as well as from her experience of European and North American post-war art, in particular minimalist art and colour field painting of the 1960s. In her sculptures and installations, she transforms symbols of the social and political by gestures designed to problematise their physical and figurative significance. Emptying her chosen objects and materials of practical use and function, Echakhch creates in her own words ‘a state of strangeness and poetic transfiguration’,(1) wherein viewers observe their potential rather than actual use. She uses this reconfigurating to provide a material presence to the vocabulary of politics and protest, and explores how the architecture and treatment of an exhibition space can also refer to forms of political expression.

À chaque stencil une révolution 2007 is an instructional piece for a single gallery wall.(2) The title, which translates as ‘For each stencil a revolution’, derives from an aphorism of Yasser Arafat (1929–2004), the first President of the Palestinian National Authority, who devoted his life to negotiating Palestinian self-determination. The title also references the labour strikes, human rights demonstrations and anti-war protests of the 1960s, before the widespread use of photocopies, when carbon paper and stencil machines were used to reproduce political flyers. À chaque stencil une révolution connects with these legacies of radical activism and politics during the 1960s — in particular the student riots of May ’68 in France and anti-Vietnam War protests worldwide. By referring directly to Western post-war art, À chaque stencil une révolution also underlines the disjuncture between the political claims of Abstraction and radical politics in the 1950s and 1960s.

In À chaque stencil une révolution, the carbon paper is deliberately blank and devoid of inscriptions. Laid across the entire surface of the gallery wall, the work is completed by pouring methylated spirits down its dark blue surface. This creates unique variations in the shade and texture of the paper surface and causes traces of the pigment to collect in pools of the solvent that dry across the gallery floor. With this performative gesture the paper is emptied of its rhetorical power, leaving each ‘stencil’ to stand as an eerie monument to revolutions past. As Michel Robecchi has suggested: ‘Echakhch’s acknowledgement of past forms of political activities is respectful and passionate, but is inevitably shaken by the implicit consideration that when its tribute time, it’s also time to move on’.(3)

1 Latifa Echakhch, quoted in Latifa Echakhch, Tate Modern, London, 2009.
2 À chaque stencil une révolution 2007 also exists in two other versions: a complete installation environment of the same name; and as an elaboration on this original installation that includes additionally nine pedestals holding sheets of carbon paper on which the artist has poured alcohol (À chaque stencil une révolution, une après l’autr’ 2007, translating as ‘For each stencil, a revolution, one after another’).
3 Michele Robecchi, ‘Latifa Echakhch’, Flash Art, vol.42, no.264, January–February 2009, p.94. 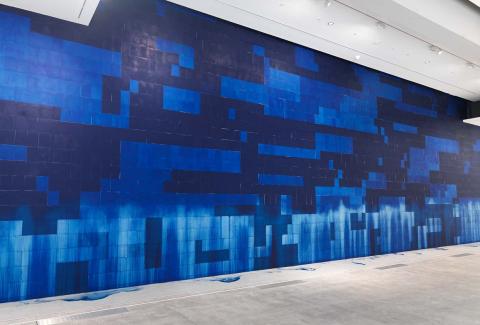