CHRISTANTO, Dadang; For those: Who are poor, Who are suffer(ing)...

Dadang Christanto studied at the Indonesian Art College in Yogyakarta, graduating in 1978. In Indonesia the 1970s was a decade marked by large-scale student protests and political activism. The Art College in Yogyakarta was a centre for intense, critical debate about the need for social and political reform and Christanto's own involvement with issues of community, personal ethics and politics developed within this context. Critical to some of the discussions at the college were ideas about what kind of art practice was best suited to contemporary Indonesia. The influences of local art forms and specifically Indonesian historical circumstances were considered vital.

Thus Christanto's works from the 1980s onwards acknowledge the cultural traditions of Java and Bali. The significance of wayan (shadow puppet theatre) and wayan berber (a traditional form of narrative story telling) had a crucial place in these early explorations. Christanto is also attentive to the rich cultural and religious heritage of Indonesia where Hindu, Muslim and Chinese peoples contribute to the ethnic diversity of the region and is sensitive to the attendant tensions that are points of friction. Christanto's shift away from working only with painting to include installations and performance represented an ideal methodology with which to consider the often conflicted situation of contemporary Indonesia. Global political and power structures are of such a complex nature at the close of the twentieth century that the human consequences of war, politics, and economics are the subject of much international intellectual, artistic and cultural scrutiny. Christanto's suspended and abstracted bamboo figures participate in this project by focussing on the role of the victim and the question of suffering.

This work, together with For those who have been killed 1992, (Acc. no. 1993.393a-) were initially shown in Brisbane at the First Asia-Pacific Triennial of Contemporary Art in 1993 and accompanied by a performance by the artist. Christanto creates an aesthetic space from which to consider these issues. He investigates the relationships between the 'victims', the viewer, and the host of communities from which they might have come. Those who oppress, who inflict violence, who perpetrate suffering, who engender inequity are also present in the veiled references in the titles of the works. To overcome the immediate pain and potential conflict of this encounter, Christanto offers the audience an opportunity to enter the work by making an act of remembrance and consolation; to offer acknowledgement within the architecture of an artwork. Though undeniably a memorial to the victims of human violence, this installation also offers that essential space for a redemptive personal gesture. 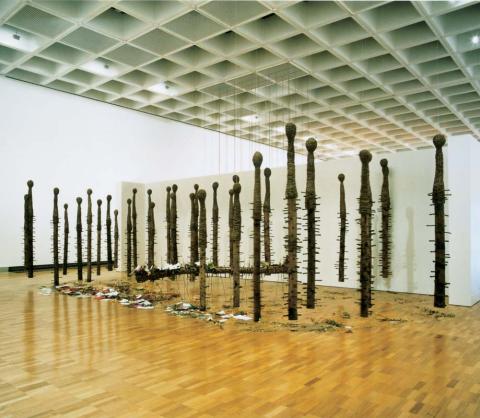