In the work Infinity nets, Yayoi Kusama revisits iconographic aspects of the large white paintings she executed from 1958 to the late 1960s. The characteristic, obsessive repetition and variation of the net and/or dot forms an important basis for much of Kusama's work. Kusama describes developing the dot and the net motif at a very early age when she began to experience hallucinatory episodes. To cope with the terror she felt when overcome by these episodes (which continue to haunt her) and to attempt to understand them, Kusama began to paint. She has written:

'Dissolution and accumulation. Proliferation and fragmentation. The feeling of myself obliterating and the reverberation from the invisible universe. What were they? I was often troubled by a thin silk-like greyish coloured veil that came to envelope me... While coming and going between this world and the unknown one, I fell sick a number of times... By painting pictures on paper and canvas and by making weird objects, I began to gradually repeat in the work the calling forth and back that took place in my soul. For me, these experiences were not temporising artistic endeavours nor makeshift art to catch up with the trend of the times - like a chameleon changing the colour of its skin according to its circumstances - but were an attempt at artistic creation based on the inevitability that emerged from within me.'(1)

The net and the dot are iconic motifs in Kusama's work. They exist as descriptive devices of an imagined reality, a method by which to grasp her situation, which she often refers to as 'sickness', and as a device through which her perception of the world is mediated. The net is the veil that reconciles the 'real' world and her 'invisible universe'; it is a screen that protects her from these worlds and is also a symbol for seeing the dynamic and monumental nature of life. Thus the 'net', as the positive expression of the absent 'dot', or vice versa, is a central motif in Kusama's work.

In Infinity nets the 'dots' emerge as spaces delineated by the painting of the net. Hues of white construct the net; the first layer of paint laid down uses shades of grey-white. Over this Kusama applies paint in rhythmic waves that seem to move across the surface. She skilfully manipulates the viscosity of the paint during its application, varying its thickness and density, and in the infinitesimal variations she is able to achieve with the whiteness of the paint - from a brilliant clear white to luminous shades of grey and cream - to create a surface that ripples and vibrates. Like the early net paintings of the 1950s and 1960s, Infinity nets (2000) is gestural in its execution. The demarcation between the 'positive' and 'negative' spaces remains fluid, so that the viewer's eye is led between an image of a net to the surface that consists of dots, an oscillation that encourages contemplation of the notion of 'infinity'.

Kusama often uses the word 'infinity' in the titles of her works; she gives infinity a form through repetition. In her 'mirror rooms' she uses reflection as another inventive formal statement of this idea. Like her obsessive constancy to the dot or net, Kusama's repeated use of the word 'infinity' to describe her works signals a dedicated commitment to her way of perceiving the world as a place of wonder and sensation. 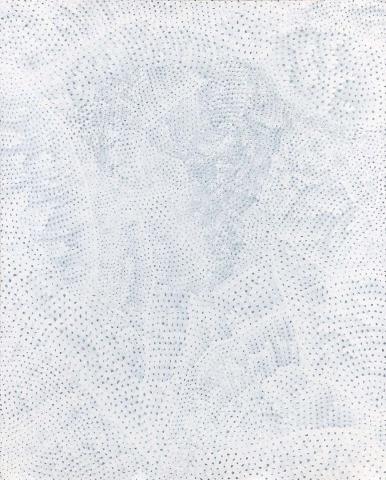