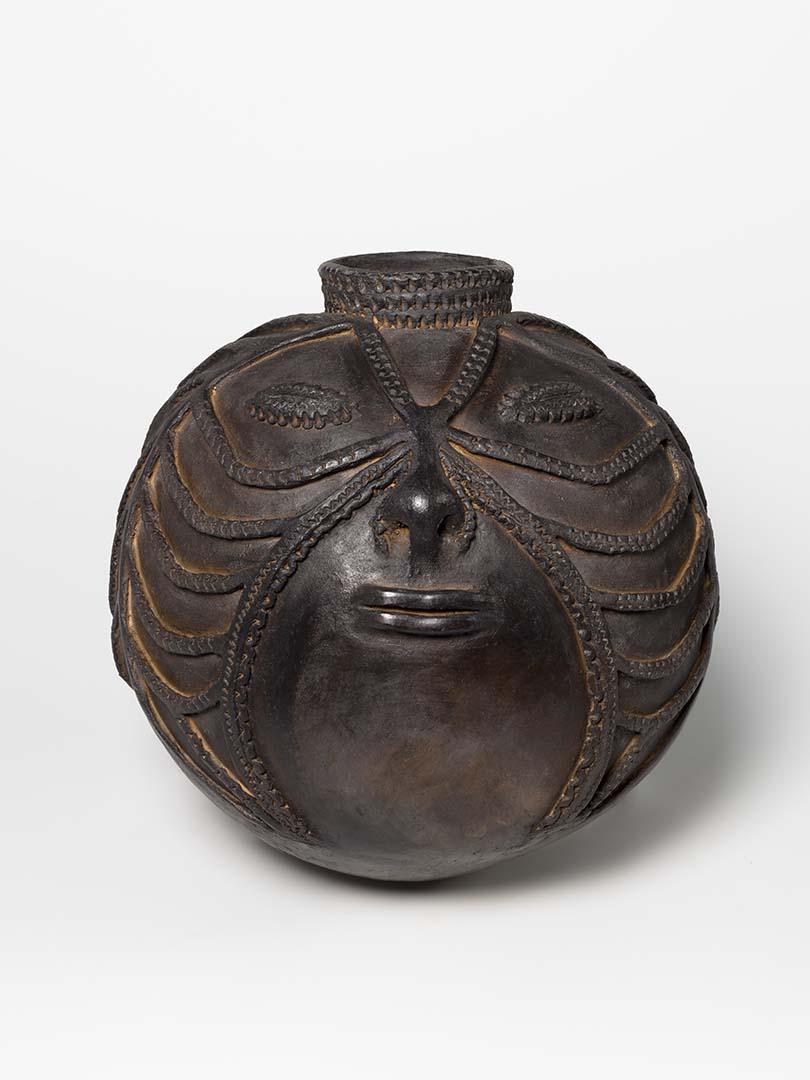 Mary Gole came to prominence in the early 1980s with her highly sculptural pottery and distinctive textile designs. While her choice of clay and textiles as artistic media flow from her familiarity with the rich ceramic and barkcloth traditions of the Orakaiva people of Oro Province, Papua New Guinea, Gole’s pots and works on paper are undeniably contemporary innovations.

Gole is one of a generation of artists whose practice emerged in the decade following the 1975 declaration of independence in Papua New Guinea. At the time, the nation’s leaders and intellectuals sought to forge a modern, urban, but uniquely Melanesian identity that would unify the diverse groups forming the new nation. Culture was promoted as playing a significant role: the development of a vibrant artistic movement was actively supported and subsequently became prominent in public life.(1)

Gole first began creating pots in 1976 while living in New South Wales (Brewarrina and Sydney), after discovering the Barwon River clay banks. She openly attributes the lavishly illustrated book The Traditional Pottery of Papua New Guinea by art historian Patricia May and the late Margaret Tuckson as the source of much inspiration. Yet her practice really developed on her return to Port Moresby in the early 1980s. Since then, Gole has travelled extensively, researching the diversity of forms and patterns found throughout Papua New Guinea. Her celebrated ‘face pots’, for example, are a response to her trips to Aibom in the Chambri Lakes region of the East Sepik, and reflect her research into the distinctive sago storage pots that continue to be made there. In Gole’s hands, the faces of mythical beings - traditionally sculpted by men - that decorate the Aibom pots are reworked with a woman’s tattooed face, subtly transforming the works into a homage to women and their labour.

Like the Aibom women, Gole has continued to use the traditional method she learnt as a child of hand-coiling clay to form the body of a pot. However, Gole doesn’t hand over the sculptural decoration or ‘face’ to a senior male artist to complete. Moving away from the depiction of mythical beings and onto more vernacular concerns and subjects, she completes her own works. Her pots are fired in a kiln rather than by the low temperature methods of the village, and the addition of sawdust and seaweed to the kiln during firing gives the work a smoky grey-brown colour and finish that has become Gole’s signature.

A group of three of Gole’s earlier pots, which celebrate the traditional utilitarian and ceremonial wares created in the Milne Bay and Sepik River regions of Papua New Guinea, were acquired by the Gallery in 2011 (Cooking pot 1997, Cooking pot with bat handles 1997 and Circumcision ceremony drinking bowl 2001). Over the past decade, as her eyesight has deteriorated, Gole has focused more on the creation of clay figures, which she forms by hand. Predominantly female, these figures record everyday life that Gole encounters in Port Moresby and villages throughout the country. Most carry a small bilum, the ubiquitous string bag used throughout large tracts of the country.

During my research trip to Port Moresby in 2014, Mary Gole revealed a new body of work, including two new, large face pots created for our Collection. One was a ‘woman’s face’ pot indicative of her early career (Water storage pot - woman's face 2013), while the other is this exquisite pot decorated with the face of a bearded man. These two works now join the three earlier acquisitions adding significantly to the Gallery’s holdings of this pioneering woman artist.

1 Sir Michael Somare, the first Prime Minister of Papua New Guinea, in partnership with Australia’s Gough Whitlam, initiated a cultural fund at this time which amongst other initiatives saw the creation of the National Cultural Council and the Papua New Guinea National Museum and Art Gallery.