The Aboriginal community of Wadeye (Port Keats), situated in the north-west Northern Territory – south-west of the capital Darwin — shares the Joseph Bonaparte Gulf with Western Australia.

Though painting on bark was not traditional in the region, Newili (1910–93) (a senior Marri Ammu law man, composer and artist) and fellow Murrinhpatha artist Nym Bandak (1904–81) — in partnership with Catholic missionaries — developed a bark painting practice to supply a local market. As the introduction in 1935 of Catholicism proved detrimental to intergenerational cultural learning, Wadeye artists viewed art-making as a means to maintain religious views and also their cultural life. In the 1950s, Newili, Bandak and other senior artist from Wadeye were even commissioned to paint the Church’s altar panels, where intricate decorations were embedded with totems and motifs to selectively reveal and conceal ancestral spiritual knowledge.

Information on the work. Newili’s Tribal battle in the mangroves at Sandfly Creek 1971 and Bandak’s undated Sacred waterholes and stars demonstrate two very different stylistic approaches. Newili’s aesthetic derives from the customary rock and cave paintings of the Fitzmaurice River, whereas Bandak draws on the incised oval wooden boards used in various rituals. Though the shape of his bark intentionally replicates a shield form, his designs have been applied using natural pigments rather than carved in the manner of a traditional shield. 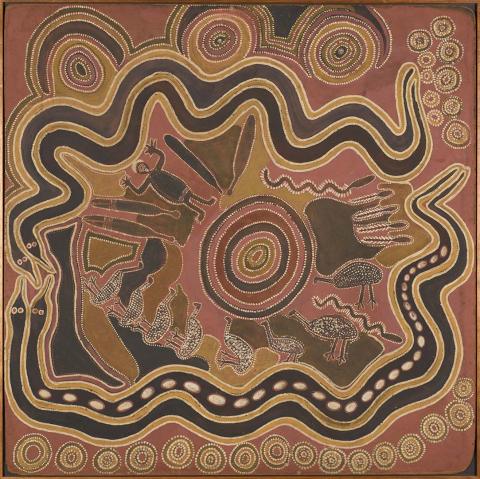 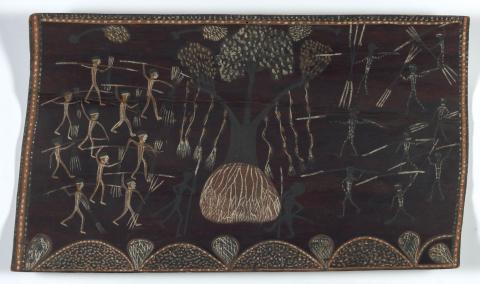 Tribal battle in the mangroves at Sandfly Creek 1971